A downloadable game for Windows, macOS, and Linux

DISCLAIMER: This is a beta version of the demo, therefore it might have some bugs here and there, especially on the "continue" mode. I hope it's not too frustrating! We'll update its soon!

CLUNKY HERO is a story-driven, platformer metroidvania game, with a touch of RPG and tons of humor. Made for gamers who’d love a platformer with a strong storyline, where you can talk with characters, solve side quests, find and buy items, change weapons and wearables, with great hand-drawn-looking backgrounds… All of that presented in a very comical way!

The developers like to think of it as a blend between the gameplay of Hollow Knight, with the humor and parodist elements of a card game like Munchkin.

In a village far, far away, a dull peasant named Rufus was living an ordinary life. The boss of the house was his wife, Brunilde, a boisterously smart and funny woman that you wouldn’t exactly call “pretty”. Life was nice and happy in the village, until one day, awakened by some magical mistake, the Evil One started to spread his minions around town, performing hideous acts against the people. The worst of which was the kidnapping of Brunilde. She was torn from Rufus’ hands and put in a prison at the Evil One’s castle. Transformed into a blondie duck-faced doll girl, she now spends all her time staring at herself in a small handheld mirror.

Determined to win her back, Rufus made a helmet out of a bucket and picked a broom as a weapon. Everybody now calls him the CLUNKY HERO, but he might be the only hope to defeat the evil one that no one wants to call by name. Rufus is now on his journey to save his wife and the whole village! 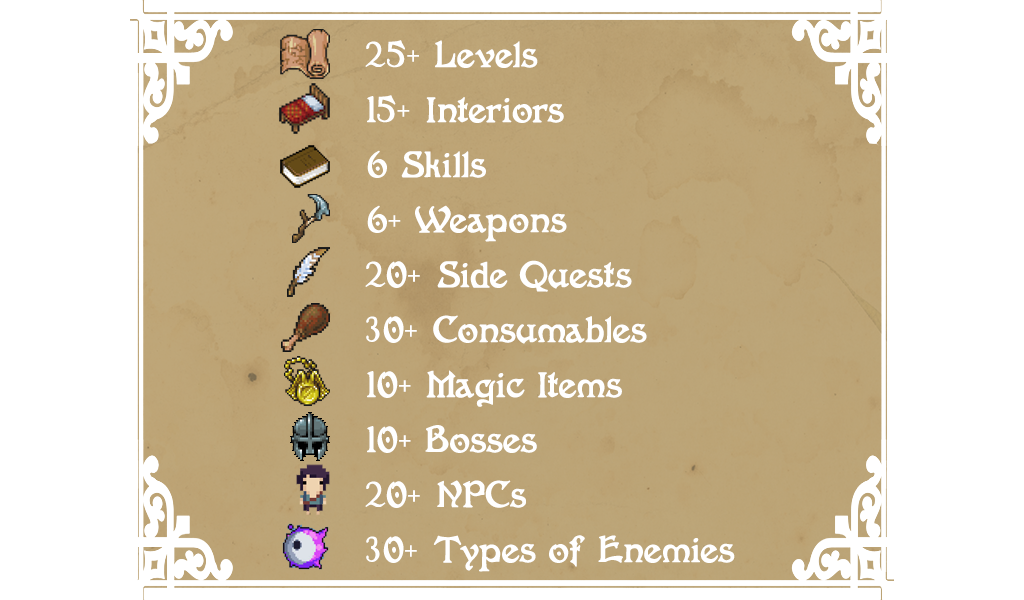 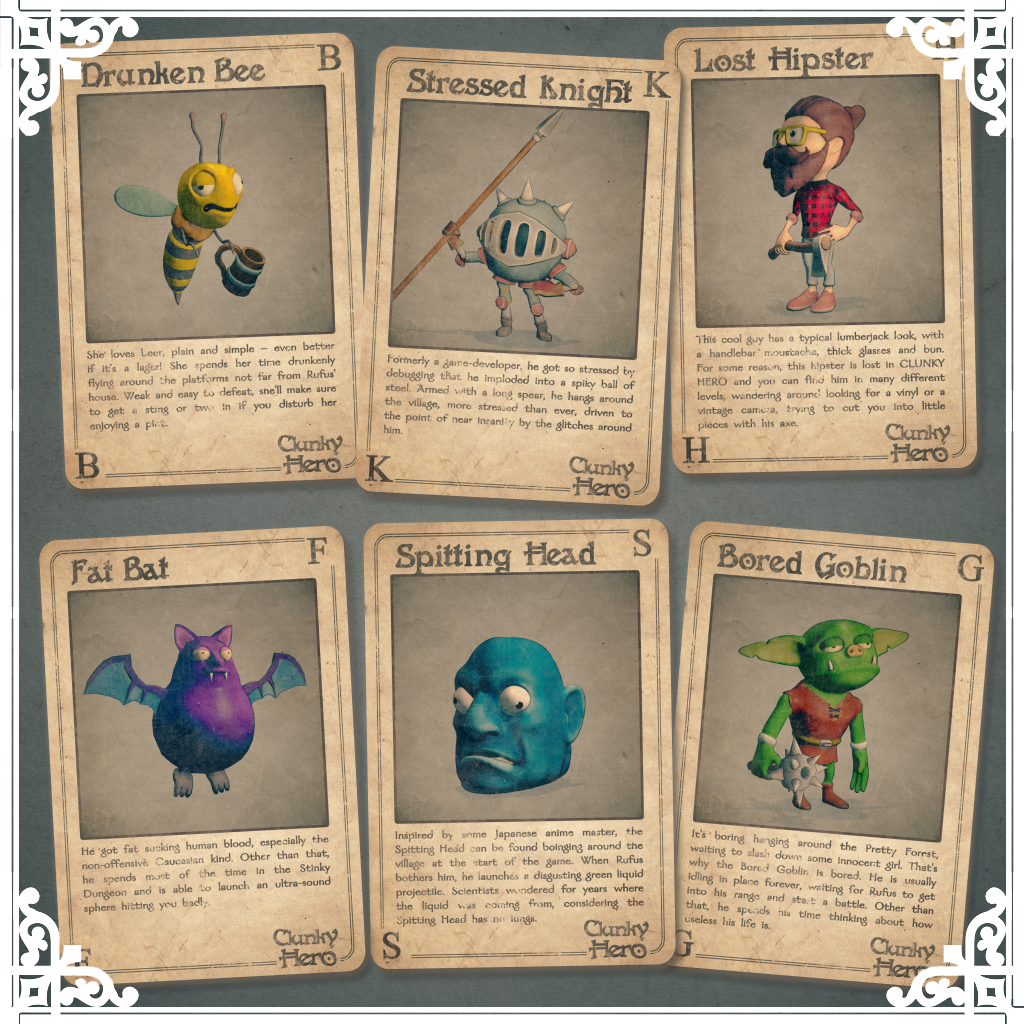 The game is being developed by Nicola Piovesan and Chaosmonger Studio. After ENCODYA, it’s the second big game project from what is formerly an award-winning film production company. The majority of the team is Italian, but there are collaborators from all over the world.

You can test yourself the quality of CLUNKY HERO by playing its free demo. With about 1 hour gameplay and the huge amount of details, it's rather a small-game than a demo! So please consider to offer the developer a beer by donating some money! It'll help us completing the game! THANKS A LOT!

If you wish, you can also donate on PayPal

Well, they are written in the "controls" menu! But glad you liked it

My bad, I rarely browse menus, that is something I should do more

doesn’t work with just a keyboard :(

There's been so much praise for this game here and around 2000 of you have enjoyed the early demo.... Let's show real support and get it backed on Kickstarter!!

Swift video for anyone not played yet and interested in all the excitement!

Thanks! Let's push all together!

Still keep getting myself beat up, but I'm having fun, so I've gone over to Kickstarter to put my pledge in.  Hope it all goes well.

Controller support seems a bit odd as the digital stick right and left, look up and down.  Not sure why that is.  Unless my controller is misconfigured.  It's a Logitech F310...  On Linux.

Thanks a lot for your support! We know lot of things need to be improved... in fact this is just a first prototype. We'll improve the full game. (Regarding the controller thing, I'm not sure... it should be like that... left-right = running left/right up-down = looking up/down... maybe it's an issue on our end)

Enjoyed this demo very much, now about to go back that Kickstarter!

I do think some defending against the enemies would be good (appreciate could be a later unlock) as it was the only clunky bit about this game! ;)

ps. perfect controller support for me, xbox one official controller

Thanks! And very glad you enjoyed the demo!!! As stated on the disclaimer at the beginning, we are well aware the demo isn't perfect and that there are many things to improve... We also know that playing with keyboard is not the best, but well, everything should work properly! And thanks for backing our campaign! Please spread it out there!

Thank you for the reply. I absolutely I will spread the word!

Totally undertstood regards improvemnts - fully expected with alpha/beta demos or teasers :) - I  feel feedback will always be a benefit to the development focus.

I must check out your other title next!

I feel like it would be a good game but i cant play it since the controls are that confusing. It shows xbox controler buttons  so its really confusing.

The list of the controls are visibile in the options. Playing with a keyboard is still not the best option, but it's doable!

That priest lied to me about the candle, but overall, a nice demo, I liked the humorous vibe throughout. Good luck with the Kickstarter! :)

ahaha no no... there'll be a candle... Consider the Pretty Forest in the full game will have 4 areas and the one available in the demo is the smallest one...  So he didn't lie to you, maybe the developer did... Support the Kickstarter so we can finish this awesome game!

I dont know the control because I don't use a controller so I check the setting and open the first chest using q. Im stuck now and don't know how to exit the view :(

LOL, you should check the controllers first of all! Anyway, to exit the inventory you have to press "i".

I thought the control gonna be normal platform controller ( E to interact, ESC to escape view). Anyway I hope you change the control on the keyboard to make it easier to control cheers

Very cool, Dev. Did you take inspiration from a favorite childhood mobile game of mine called Wind-Up Knight?

Thanks! But actually no... I never played Wind-Up Knight! Looks cool though.

I gave it a try. I love the theme haha and the characters are all just the right flavor of ridiculous, one thing I would recommend is volume leveling, things are pretty out of level with each other, especially in dialogue. But over all it was really fun to play! I included it in my Top 5 pick of games I played this past week! Keep up the great work!

Thanks a lot! You can adjust the volumes actually... but I agree that we still need to tune a lot of things in CLUNKY HERO (audio included). Anyway, please consider your support & share of the Kickstarter campaign! THANKS! It'll mean a lot!

I like the premise of the game. Keep up the good work!

thanks a lot! please consider a contribute on Kickstarter! THANKS!

This was neat! I'm super into Metroidvanias and especially love Hollow Knight, so this was nice to play. I ran into a bit of an issue at the end, but other than that everything was great. The humor in particular reminded me of the Conker games.

I really enjoyed the demo - The graphics are awesome and aside from a few tiny beta-bugs, it was a smooth experience. The music is perfect for the areas that were accessible. Just backed it on Kickstarter - I can't wait to play the full version. I love metroidvania games and this one really stood out compared to a lot of the same-old-same-old cookie cutter ones that have flooded the market lately. Exploring was fun and I found a couple secret areas. Anyway - Great job!

Thanks a lot! I totally agree with you! Let's hope for more support on Kickstarter!

Thank you! Please consider your support on Kickstarter! We truly count on each one of you!

I tried to play in a keyboard but al the on-screen commands are presented in controller buttons, I have to press Esc every step to figure out what I am supposed to press, there is no way to remap the buttons on the keyboard and gets confusing, I'm on a laptop so using End, Home, PgUp and PgDwn requires button combinations.

The game looks pretty cool but this makes it annoying.

Yeah, we know, playing with keyboard is not the best. We'll release an update of the demo with different inputs (no PgUp | PgDn) while the full game will have full customizable interface!

Good to hear ,too many devs leave keyconfig at the bottom of the list and ,come release day ,loads of gamers can't play their game.  Nothing worse than having keys stuck on WASD or camera hard-coded to the arrow keys which a lot of gamers use for movement.

Anyway ,nice intro video ,like the humour :) but would have been nice to see a bit of gameplay included.

Though maybe it's by design to make you download the demo :P

Reply
yeah it's me77 days ago

I really enjoyed this game, good work guys, I think the game need to have dodge system or slide to avoid the enemies and also the attack need to be smoother like when player move and attack the player stop this is kinda weird and in the boss I tried to spam and yeah I killed him without he do nothing to me , I hope you all luck guys!

Thanks for your feedback. As stated at the launch of the game, Enemies AI (and combats in general) is one of the things we surely need to improve! As well as other things you mention and few bugs here and there... Our aim is to make a way larger game with tons of items, weapons, enemies and so on! The best way to help this project is by supporting it on Kickstarter and spreading it out there with all your friends and followers!

Could not play the game, i got to the first chest and got stuck in the interface

Weird... are you using a controller or keyboard? Have you read the list of commands in the menu? Try again or report a way to reproduce the bug! Thanks a lot!

This is an absolute masterpiece! The animation, character design, story, dialogue, combat, world, it's all incredible and I can't wait to see what the future holds for this game! I genuinely wish you all the best of luck with this!!

Thank you very much!!! Please support our Kickstarter campaign otherwise we can't finish the game! THANKS!

I been looking forward to play this game for a while now and I was happy when it was released here! I hope you love the game and enjoy yourselves with the story being as fun as it is.

I particularly enjoy the intro the really beautiful designs of the level. I would like to see hints added to it maybe you can purchase them with coins? I would also like to see an improvement in sounds for hitting and getting hit. But the game overall is amazing! Great indie game which on my channel i love promoting.

As always is been a pleasure and see you at the next one!

Lovely little preview of a game that will make you smile. It looks good, it sounds good and it'll give you a laugh or three. The beta/preview is quite short and a tad rough around the edges, but I heartily recommend giving it a go if you enjoy platforming and are not allergic to a bit of silly humour.

After you've played the demo, why not go ahead and back the game on Kickstarter? I just did. Or donate here on itch, why not? I think it'll be well worth a few units of currency. 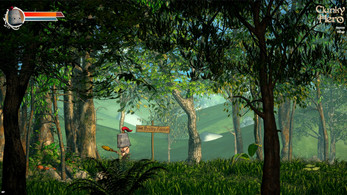 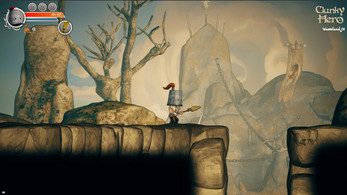 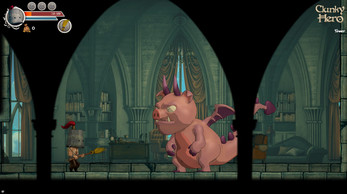